A retry is a specific approach of error processing that analyzes the response to a request and if a known failure response is received invokes a repeat for a specified number of attempts and a specified period.

Most commonly retries are used for errors connected with remote server responses or network issues such as '500 Internal Server Error'. Also, HTTP errors, particular network errors (for example, 'The remote hostname cannot be resolved' or timeout errors) are generally retriable.

Find below a list of retriable errors used in MSP360 products:

These retriable errors have constant values and cannot be configured.

The following errors upon requesting Managed Backup server are retried every 1 minute within 4 hours:

The following errors are retried every 5 seconds within 15 minutes:

The following errors received from storage are retried.

If network issues occur, a current operation (the one that is taking place at the moment of network issue occurrence) will be retried according to the settings as configured (3 times by default), then the plan will be put on hold for some period (1 minute by default), then retried again starting by configured retries. This sequence will be repeated for 100 minutes by default. If network issues persist, a plan fails with an appropriate error. If a network connection is re-established within this 100-minute period and then occurs again, a 100-minute period is reset.

This applies to the legacy backup format only

For plans in legacy backup Format, the logic is a bit different. Each file is uploaded/downloaded by its own upload or download operation. If network issues continue occurring, each currently running operation is retried according to configured settings (3 times by default). If no successful retries occur, then the operation is put on hold for 1 minute, then is run again. This loop is repeated 100 times in total, then the plan fails with an appropriate error. 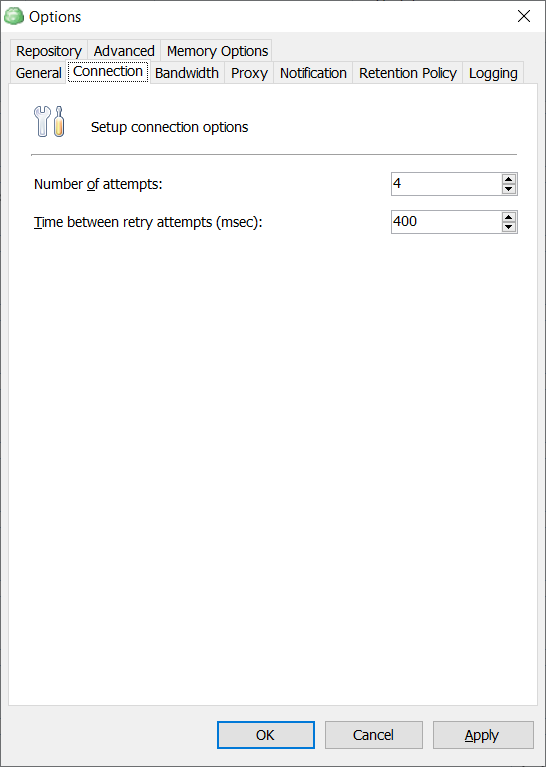 In some other cases, the value is linear. For example, if upon a restore a data part is downloaded from storage and the hash sum is invalid for some reason, every retry of reading this data again part will be executed after 400 msec

For some retriable errors, the number of retries is unlimited. These are errors that the server reports to make the client reduce the request rate limit: