How to Increase Upload Speed

For backup duties, the data transmission speed is a key performance indicator. CloudBerry Backup provides users with efficient data transmission tools but in some cases, backup processes can be slowed down. This article guides you through backup speed slowdown issues and the measures that help to avoid them.

See the list of allowed TCP ports (for both outgoing and incoming connections) for any firewall or antivirus.

CloudBerry Backup splits files into 10 MB chunks by default to upload them to storage. The chunk size is adjustable. The overall backup performance can be improved by adjusting chunk size with an approach as it is equal to the file size, as it is shown in the diagram below. 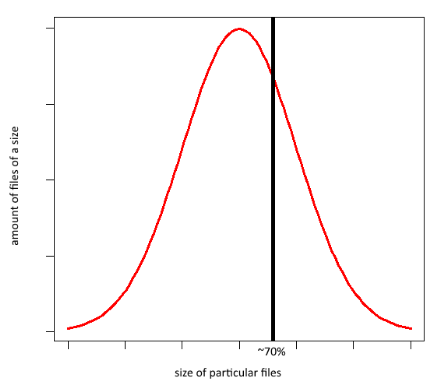 In fact, this is a heuristic value as chunk size (or N x chunk) must fit approximately 70% of files. Thus, in backup there will not be many chunks of small sizes, i.e. 21.5 MB cannot be split efficiently to 7 MB chunks.

For example, if the average size of a single file of your backup plan is 17 MB, you should adjust chunk size to 18 MB to optimize the process. However, consider the recommendations of point 2.

For backup plans containing smaller files, you can use small chunks; accordingly, it is recommended to use large chunks for large files.

Mind that the RAM consumption may grow significantly in accordance with the formula below: RAM consumed = 2 x thread count x chunk size

The principles of network connection are also a thing to consider.

For a Gigabit connection, 10 MB chunk size could be too small (provided it is not set because the files are very small), so it is recommended to set it 120 MB or alike.

If you are using a modem connection (satellite or cellular), then the minimum chunk size of 5 MB is recommended.

Note that your host connection bandwidth is likely to be used by multiple processes on multiple machines. So, instead of theoretically possible bandwidth, it is reasonable to use the expected available bandwidth for upload speed estimation.

It is important to adjust the thread number to use network bandwidth and CPU most effectively: too many threads may create a significant load for both network and CPU and decrease overall performance. Too few threads will reduce the uploading speed respectively.

If a network connection is not stable, smaller chunks and smaller thread count work better. For small file backups, bigger thread number and smaller chunks will be more efficient. For big files and middle-sized files, it is recommended to use the default number of threads (6 in Backup for Windows, 5 in Backup for Linux and Mac) and chunk size adjusted as described in the paragraph above.

For improving overall performance it is reasonable to exclude files of smaller importance from your backup plan (or include important files only). Use backup filters to manage your backup content.

On different OS it may differ, but not significantly. See the example of using file filters for macOS GUI in the figure below. 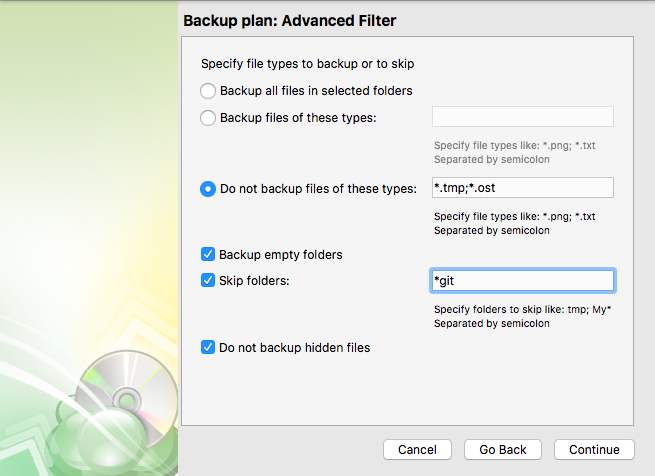 One more option is splitting the whole dataset into several backup plans.

For example, images and videos do not change frequently, so they can be backed up on a monthly basis.

On the contrary, MS Office documents may change several times a day, so they can be scheduled for a daily backup plan [ *doc; *docx ] files.

In addition, you might never want to backup any temporary files. Thus, exclude (or don't include) all [ *tmp; temp; ~; *.bak ] files from all plans.